I’ve been thinking a lot lately about the whole false dichotomy of theory vs practice and the divide it seems to have spurred among those who do social justice work in libraryland and beyond. While I wasn’t there, I hear Dave Hudson gave a great keynote about this at the Critical Librarianship and Pedagogy Symposium last week. Judging from the response on Twitter and the community notes, this discussion really got people thinking about and reframing things they’d already been mulling over. I call that a win.

But through it all there was still something about the discussion that was missing. I agree that theory is practice and that any attempt to distinguish between the two is setting up false camps. I also agree that lived experience is a form of intellectualism and theorizing. And I’m totally there for the idea that calls for plain language and practicality can be used to further erase the intellectual work happening in marginalized communities. There is nothing about that with which I disagree.

What has been bothering me—and truthfully, this has been bothering me for months now since the #whyicritlib meta-discussion Kevin Seeber hosted a few months ago—is that the discussion has gotten conflated and simplified such that the real issues are being hidden by straw men arguments. Essentially, exactly the stuff that Dave Hudson wisely warns us against doing.

We’ve been framing the debate as theory vs practice or lived experience vs theory, but for those of us who critique critical theoretical work from within, we’re talking about something much more nuanced. We’re not saying theory has no place or lived experience can’t be theoretical. What we are saying is that much of the theory we see and hear from our colleagues remains largely colonized, that is, it is largely white, male, Western, cis-het, Judeo-Christian.

When we call for more value for lived experience and “practicality” or “plain language,” what we’re really calling for is more value for the theoretical work coming from the margins. We want to hear a bit less from the scholar in the ivory tower and a bit more from the scholar on the street. A bit less of “traditional” ways of knowing and a bit more from “alternative” ways of knowing. Community knowledge. Mother knowledge. Tribal knowledge, so to speak. Maybe less Foucault and more hooks or Davis or Hill Collins (all of whom, wonderfully enough, combine ivory tower scholarship with alternative ways of knowing in beautiful and empowering ways).

So when I decide to forgo talk of panopticism and instead talk about how my black parents, grandparents, and extended family taught me that “the Man is always watching us,” it’s okay. I’m not dumbing down the theory. I’m not even changing it. But I’m bringing intellectualism from a different quarter, speaking it in a different language.

I think, moving forward, it would help if we refrain from speaking of this tension as theory vs practice and acknowledge it for what it really is or should be: a call to decolonize our social justice work. We want to step away from the white, male, Western mainstream and gather intellectual work from the margins. We want to feel comfortable citing examples from Grandmama and Miss Peachy down the street, even as others cite wisdom from Althusser or Marx.

I’ve been watching a talk given by Dr. Spencer Lilly at the University of British Columbia during his stay from New Zealand. In it, Dr. Lilly talks about what it means to decolonize “as a long-term process” that goes beyond mere governmental transfer of power to the “cultural, linguistic and psychological divesting of colonial power.” (Lilly, 2015, quoting L. Tuhiwai Smith, 2012). 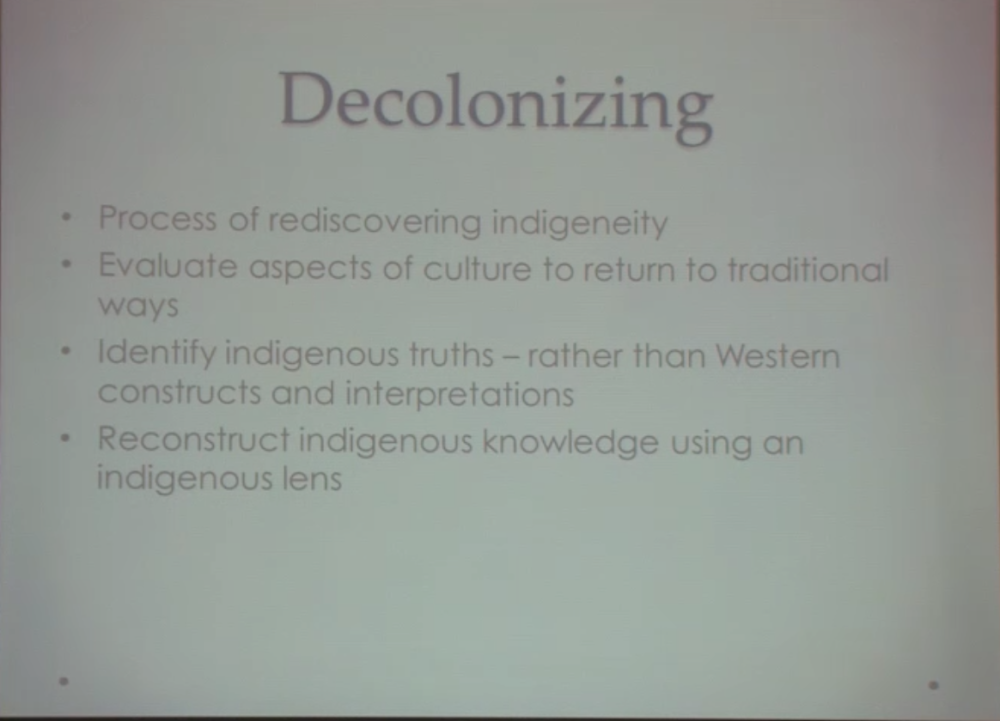 Screenshot of slide from Dr. Spencer Lilly’s “Decolonize or Indigenize?” presentation at UBC

This is what I’m talking about. Let’s divest colonial, dominant power from the cultural, linguistic, and psychological realms of our critical work. Let’s open up what it means to be mainstream and capture the intellectualism happening at the margins. And let’s do this work openly and honestly, without the use of false dichotomies.