When it comes to anti-oppression work, I have a problem with empathy. Or rather, I have problem with the ways in which people with privilege and power enact so-called empathy. The ways in which it always seems to demand a centering of their thoughts, feelings, emotions, and experiences in a narrative that otherwise should be about the trauma they enact, knowingly or unknowingly, intentionally or unintentionally, on the oppressed.

Here’s what I mean.

A couple months ago Zoé, a beautiful Black woman with a lot of powerful things to share, tweeted a story about having a conversation with another Black woman about racism in different national contexts. It was a life-giving session of shared truths and traumas, as often happens when women of color are blessed to be in honest communion with one another. After their trauma-baring and sharing talk, a white man sitting nearby turned to them to thank them for their words and to let them know that he had been listening and that, as a doctoral student studying issues of race, he now felt he had a lot of great material to think about for his dissertation.

Just like that, the experiences of these beautiful, powerful, oppressed-but-not-diminished had been reduced to fodder for yet another white penis-wielding Ph.D (as if there aren’t more than enough already). Their lived, embodied, emotionalized, spirit-driven experiences, their moment of sacred womanist communion, had been befouled by the soulless exploitation of the white male gaze.

And yet, this dood undoubtedly felt he was paying Zoé and her companion a compliment. Undoubtedly, he felt he was exercising the very epitome of racial and gendered empathy.

The very same day Zoé shared these tweets, I had my own run-in with what I’ll call oppressive empathy. I was attending a symposium on the use of archives in the sciences and one of the sessions was being led by a white woman from a medical archive. Let me begin by saying that this white woman was a very Nice White Lady™, and I bear her no ill-will. But she and some of the others in the group messed up, so I’m going to tell my story and share my truth nonetheless.

For this archival activity, we were asked to engage in a practice of historical empathy, a classroom-based thought experiment that has students conceptualize of a historical figure’s actions within the context of that figure’s imagined thoughts, values, and beliefs as demonstrated by evidence from the period. Walking into the activity, I was sincerely hoping that we’d be activating our historical empathy to connect with some otherwise erased or forgotten voice in historical medicine. After all, a major theme of the symposium had been to discuss archival silences in the sciences and methods for surfacing oppressed narratives.

However, for this activity, we were handed a copy of a speech given by a woman doctor at a professional conference for women doctors in 1910. The archivist had us read a portion of the speech about the latest advancements in medicine and public health, then she began to lead us in the thought experiment. We were asked to imagine that we were attendees at the conference and that we’d be having lunch with the speaker later in the day so we’d need to be familiar with her work.

At this point, even before the traumatizing portions of the activity, I already felt bothered and uncomfortable. Even though the portion of the speech was fairly innocuous, I suspected I knew where it was headed. Also, everyone else in the room was white and could readily imagine themselves as early 20th century doctors attending a professional conference, regardless of gender. I, on the other hand, struggled to see myself, as a Black woman, being permitted to earn a medical degree at the time, much less being welcomed by my white peers in a professional setting.

At this point, the archivist had us read the succeeding portion of the speech, and sure enough, I’d known exactly what was coming. The speech goes on to talk about the “purification of the race” against the “over-proliferation” of other races. Yep. I sat back, already feeling cut by the professional rehashing of my historical trauma in the presence of my white colleagues, when the archivist then asked us to imagine how we would broach conversation with the speaker during lunch. “Bear in mind that just calling her racist isn’t going to be very effective. So how can we connect with her by better understanding her current beliefs and values in context?” the archivist asked us.

What followed was essentially a discussion about reaching out to and empathizing with those who espouse hate-filled beliefs, values, and practices. My white colleagues eagerly embraced the experiment and conversation. In particular, they extolled the way the activity allowed them to disengage from their currently held beliefs and identities to reach out to someone across history. They also readily related the activity to learning to reach out to the many unabashedly parading their hate today. I sat back and disengaged; the emotional trauma of witnessing the historical violence that was enacted against people like me being treated as an academic activity was too much for me.

After the activity, I approached the archivist to suggest that she make space in future iterations of the activity for the identities and emotions of students not able to take a distanced, “objective” approach. I also encouraged her to include a practice of historical empathy for the victims of this doctor’s beliefs and values. We’d been asked to show empathy for this white woman whose professional work was based in white supremacy, oppression, and hate. But what about those she denigrated? What about those erased from her contemporary narrative? What about those doing work that spoke against this oppressive “product of the times”? 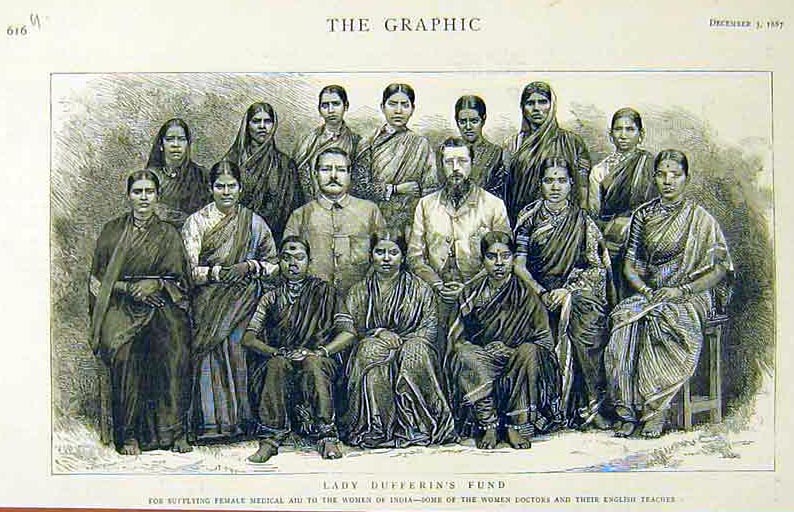 These are the types of women doctors for whom I’d like to exercise historical empathy. “Women doctors being trained to care for women patients,” The Graphic 1887, Wikimedia Commons, PD

My trauma is not your thought experiment. And if that’s what you need to exercise empathy, then perhaps you need to reexamine your anti-oppression praxis.