I just got back from the 2018 American Library Association Annual Conference in New Orleans, and I actually feel invigorated. 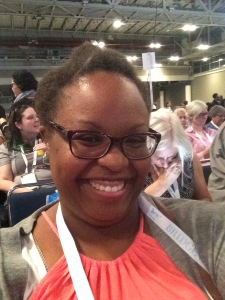 Me, waiting excitedly to see First Lady Michelle Obama at ALA Annual 2018

And that’s saying something given how the U.S. Supreme Court just upheld the President’s ban of Muslim folks while he still orders the holding of thousands of children of color in cages.

Being invigorated this year is also huge because this time last year, after the 2017 ALA Annual in Chicago, I came back demoralized and exhausted by whiteness and then eventually harassed by white supremacist trolls.

But at this ALA, I made some changes. I took more breaks and surrounded myself with colleagues of color and allies. When I could, I took myself out of spaces and situations that felt tiring, leaving me more bandwidth for coping with the spaces and situations from which I couldn’t leave. My parents came for a day, and I soaked up some much-needed familial love. In short, I made my self-care a priority, and it paid off.

I also had the opportunity to present in two wonderful programs that really left me feeling encouraged, hopeful, and ready to keep doing the work.

The first was a panel with Nicole Cooke, Miriam Sweeney, Cynthia Orozco, Stacy Collins, and Elvia Arroyo-Ramirez (in absentia) titled “Bullying, Trolling, Doxxing, Oh My! Protecting Our Advocacy and Public Discourse Around Diversity and Social Justice.” During the session, we each shared our stories of suffering extensive harassment online, by phone, and in the mail, from right-wing white supremacists angry about our public social justice work. We also talked extensively about the lack of meaningful (or any) support we received from our institutions and professional organizations, including ALA, and suggested better, more productive ways for providing support to harassed professionals. I shared my experiences after last year’s ALA, when I received hateful tweets, emails, and voicemails from white supremacist trolls about my post on race fatigue. I even had people calling my library and university administration about me. It was a devastatingly traumatic time, but I made it through with the support of my family and wonderful allies and friends, like the women with whom I had the pleasure of presenting. The room for our panel was packed, and we heard from several attendees who were eager to take the conversation further in developing plans to provide support for victims in the future. I was also delighted to learn more about Stacy’s Anti-Oppression LibGuide, an amazing resource for supporting folks from marginalized communities and educating potential allies.

My second session was a workshop I led on “Breaking Below the Surface of Racism, Whiteness, and Implicit Bias,”  which was part of the Association of College and Research Libraries series of programming. I figured we’d be sequestered in a tiny room and there’d be a small group of folks who are already heavily involved in this work. So I brought 40 or so handouts, thinking I was being optimistic.

The room was HUGE and packed. There were 500 attendees for my workshop. FIVE HUNDRED.

And we had a great time. There was a wide diversity of attendees, white and people of color, from all types of libraries (not just academic), from all different levels and ranks of work or management. Everyone was very engaged and eager to participate in the group and plenary discussions that I had arranged. After all, antiracist work is active and collaborative, so we put that into direct practice during the workshop. It was a room full of people willing to learn, teach, share, make mistakes, be corrected. There was an amazing collaborative, supportive energy flowing through those 500. And it was made even better given the fact that my parents were also in the room. What a beautiful, beautiful time. Ryan Randall got these community notes started and others filled in if you want to check them out.

So, it was a good conference for me, on the whole. Add on top of that getting to hear First Lady Michelle Obama dialogue with Librarian of Congress Dr. Carla Hayden and to hear actress extraordinaire Viola Davis speak, and I can’t help but to feel invigorated and surrounded in my Black girl magic.

Don’t get me wrong, our very white, cis-het, middle-class profession still has a ways to go. It wasn’t all roses. At our last session of ALA Council, many of my fellow cisgender and gender-conforming colleagues refused to be bold and stand with our genderqueer and trans colleagues on a resolution that would aim to have 100% of conference bathrooms be gender-inclusive. We ended up with a weak compromise that only calls for a “sufficient mix” of gender-inclusive and gender-specific bathrooms, a resolution that really changes nothing of the status quo. And what was more disheartening was hearing the arguments being made for “safety” and the “comfort” of the oppressive majority. It felt grossly familiar to stuff many have lived and the rest of us have read but in our history books. We need to do better.

We can do better. And I’m determined that we will. My ALA Council term ends next year, and I’ve already submitted my candidacy for another term. So, we’ll see.

But in the meantime, I’m taking this renewed energy I’ve got and pushing forward with the fight. To ALA and beyond!

I’m super excited about this new volume edited by Rose Chou and Annie Pho, Pushing the Margins: Women of Color and Intersectionality in LIS, coming this fall from Library Juice Press. Get one!

One of my former library jobs was in a community college setting where one of our system libraries was also the community library: West St. Petersburg Community Library @ St. Petersburg College. So that’s kind of what has me started thinking along these lines, but I’d love to hear about more potential and actual collaborations happening out there.

This is going to be a very informal chat—well, they’re all informal, but this one will be even more so. I’m soliciting questions; feel free to drop them in the comments below or send them my way on Twitter.

Here are some of the questions I’ve gotten so far (thanks, all!):

Keep those questions coming! And join me on Tuesday, Sept. 6 at 9pm EST!